Here is a comprehensive list of all that was considered currency in Nigeria from pre-colonial times till date. 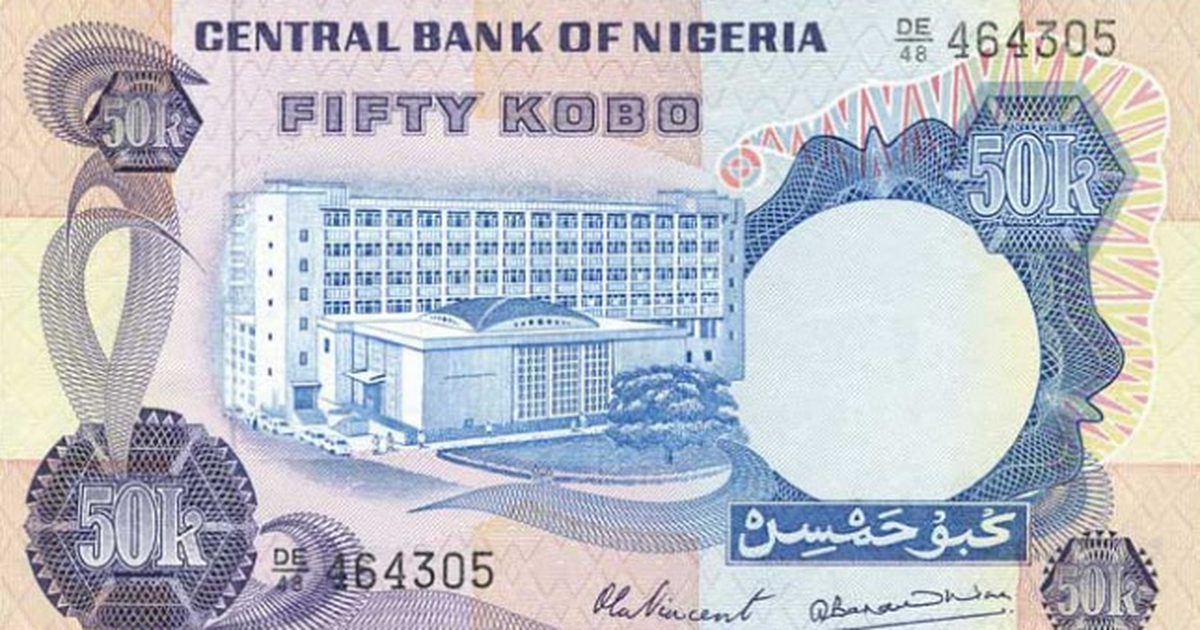 fifty koko currency Nigeria (Scooper)
Before this current eighth notes and three coins, a lot of currencies had come and gone.
Take a trip down memory lane and check out the timeline of currency in Nigeria.
An ideal currency should be hardy, long lasting, easy to count, difficult to counterfeit, portable, durable and easy to recognize. Right now, Nigeria has eight currency notes — N1000, N500, N200, N100, N50, N20, N10 and N5 — and three currency coins — N2, N1 and 50k — which fulfil all these criteria.
Before now, the country had issued and withdrawn so many notes and coins that it might have been hard to keep up. However, we’re here to give a full list of all the currencies that had been used prior to now.

Pre-colonial era/Before 1700-1900s
Trade-by-barter system using farm produce and livestock like goats, cows, sheep, were common as a system of currency. However, due to the advent of slave trade and invasion of Europeans, Manillas, which are pieces of copper in horseshoe shaped form, were introduced as a slave trade currency. According to African Bank Notes, 12-15 brass manillas purchased one slave at the time.
One of the oldest known forms of currency in African parts is cowries. Cowries per bag were used before bank notes and coins were introduced into the economy.
According to Central Bank of Nigeria (CBN), 40 Cowries formed a “String”; 50 Strings made a “head” and 10 heads comprised a “bag”. In Lagos, in 1865, one bag of 20,000 shells was exchanged for one or two English Pounds.
Colonial era (Early 1900s)
According to African Bank Notes, the British West African Currency Board was constituted in 1912 to control the supply of currency to the British West African Colonies. Nigeria, Ghana, Sierra Leone and Gambia used these currencies. Cowries, being the main currency at the time proved to be much of a competitor to the paper money introduced by the British but by the 1920s, their use had finally fizzled out. Then, One Centre Lagos was in circulation as currency.
The West African Currency Board finally issued its 2/- ,10/- and 20 shillings in 1916-1918, but before these supplies could reach Nigeria, the Nigerian Authorities were forced to issue their own emergency currency in 1918.
Eventually, the 2/- ,10/- and 20 shillings were in circulation in 1918.
However, the notes were received poorly and eventually withdrawn in 1923 as not many could afford to use them. It was after another ten years that the notes, restyled, were reintroduced between 1928-1941. These were a better quality print.
Due to increased currency demands, the board kept restyling the currencies and issuing new notes, including the five pound note in 1954, which was the highest note in circulation at the time.

With Independence looming, the West African Currency Board had to pack up and the Central Bank of Nigeria was established in 1959. However, they still used the pound.
The Central Bank of Nigeria issued Nigerian currency notes in the denominations of Five (5) pounds, One (1) pound, Ten (10/-) Shillings, Five (5/-) shillings and coins in the denominations of Two (2/-) shillings, three (3p) Pence One (1p) Penny and One half (1/2p) Penny.
1965
In 1965, the Legal tender was changed to reflect the country’s republican status. The denominations of Five pounds, One pound, Ten Shillings and Five shillings were reissued in different colours from those of 1959.The coins in use were still the ones issued in 1959. The notes all had the same pictures in the front but differed in the illustrations at the back.

1973
Nigeria made a great leap in changing to its own decimal currency on January 1, 1973. Both notes and coins experienced this change.

1977
In 1977, following the assassination of General Murtala Ramat Muhammed (1938-1976), the Twenty (20) Naira note was issued as the highest denomination and the first currency to bear the portrait of a Nigerian citizen, the late Head of State. The note was issued on the 1st anniversary of Gen. Muhammad’s assassination as a tribute. All the other currencies remained the same.

1979
On 2nd July, 1979, all the other notes of Ten Naira (10), Five Naira (5), One Naira (1) were introduced to reflect portraits of national heroes — Alvan Ikoku, Sir Tafawa Balewa and Sir Herbert Macaulay — as declared on October 1, 1978. In order to facilitate identification, distinctive colours which were similar to those of the existing banknotes of the various denominations were used. The engravings on the back of the notes reflected cultural aspects of the country.

1984
In April 1984, all the notes were withdrawn and reissued in interchanged colours, except the 50 kobo note. This was done by the military administration which took over power in December, 1983, to arrest the alarming rate of currency trafficking going on at the time. However, the coins remained the same.

1991
In October 1991, Fifty Naira (50) note was introduced as the highest denomination and the One Naira (1) and Fifty kobo (50k) were withdrawn and coined. A completely new coin range was issued as part of a major reform of the nation’s currency structure. The coins were in the following denominations. One Naira (1), Fifty kobo (50k) Twenty five kobo (25k), Ten kobo (10k) and One kobo (1k). Half kobo and five kobo were withdrawn in this year.

1999
The Hundred (100) Naira note was introduced on December 1, 1999 as one of the new generation notes of the Nigerian currency system. It included the most recent developments in security printing technology on paper and ink. The main feature on the front is the portrait of Chief Obafemi Awolowo, former Premier of Western Region. At the back is the picture of the Zuma Rock – a major landmark in Niger State in the Northern part of the Federation.

2000
The Two-Hundred (200) Naira note was released on November 1, 2000, with the same security features as the Hundred Naira. Its front hold a picture of Alhaji Sir Ahmadu Bello, the Sardauna of Sokoto and the first Premier of Northern Nigeria.

2001
The Five-Hundred (500) Naira note was released on April 4, 2001. On its front is a portrait of Dr. Nnamdi Azikiwe, first President of the Federal Republic of Nigeria. At the back of the note is the picture of an offshore oil-rig.

2005
The One-Thousand (1000) Naira note was released October 12, 2005, with even more advanced security features. It is currently the highest denomination in circulation. On the front of the note are the portraits of Alhaji Aliyu Mai Bornu and Dr. Clement Isong — who were the first and second indigenous Governors of the Central Bank of Nigeria. At the back of the note is the picture of CBN’s corporate Head Office in Abuja, Federal Capital Territory of Nigeria.

2007
In 2007, the one (1k) kobo, ten (10k) kobo and twenty-five (25k) kobo coins were ushered off the market. In February, redesigned currency notes in the denominations of Fifty Naira (50), Twenty Naira (20), Ten Naira (10) and Five Naira (5) were introduced in Polymer form.
The One Naira (1) and Fifty kobo (50k) coins were also redesigned, while a new Two (2) Naira coin was introduced. By May of the same year, the old notes had been successfully withdrawn.

5 Thoughts to “A trip down memory lane: The timeline of currency in Nigeria”

Face Of The Month